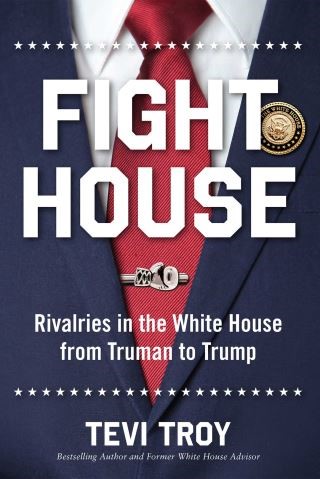 Rivalries in the White House from Truman to Trump

THE WHITE HOUSE HAS ALWAYS BEEN A FIGHT HOUSE

But as presidential historian and former White House staffer Tevi Troy reminds us, bitter rivalries inside the White House are nothing new.

From the presidencies of Harry S. Truman, when the modern White House staff took shape, to Donald Trump, the White House has been filled with ambitious people playing for the highest stakes and bearing bitter grudges.

-How the supposed “Camelot” Kennedy White House was rife with conflict

Insightful, entertaining, and important, Tevi Troy’s Fight House will delight and instruct anyone interested in American politics and presidential history.

Tevi Troy: TEVI TROY, Ph.D., is a bestselling author, presidential historian, and a frequent television and radio analyst, appearing on CNN, Fox News, Fox Business, CNBC, C-SPAN, and PBS NewsHour, among other outlets. Dr. Troy also has extensive White House experience, having served in several high-level positions over a five-year period, culminating in his service as Deputy Assistant and then Acting Assistant to the President for Domestic Policy. He is the author of Shall We Wake the President?, a history of presidents dealing with disasters, which made three best-of-the-year lists in 2016. His 2013 book, What Jefferson Read, Ike Watched, and Obama Tweeted: 200 Years of Popular Culture in the White House, was a Washington Post bestseller. Dr. Troy has a B.S. in Industrial and Labor Relations from Cornell University and an M.A and Ph.D. in American Civilization from the University of Texas at Austin. He lives in Maryland with his wife, Kami, and their four children.