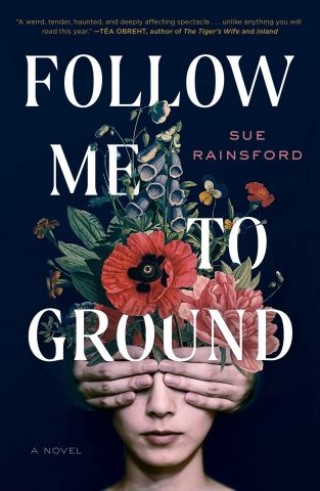 Palm Beach Post, BuzzFeed, and LitHub’s Most Anticipated of 2020

A haunted, surreal debut novel about an otherworldly young woman, her father, and her lover that culminates in a shocking moment of betrayal—one that upends our understanding of power, predation, and agency.

Ada and her father, touched by the power to heal illness, live on the edge of a village where they help sick locals—or “Cures”—by cracking open their damaged bodies or temporarily burying them in the reviving, dangerous Ground nearby. Ada, a being both more and less than human, is mostly uninterested in the Cures, until she meets a man named Samson. When they strike up an affair, to the displeasure of her father and Samson’s widowed, pregnant sister, Ada is torn between her old way of life and new possibilities with her lover—and eventually comes to a decision that will forever change Samson, the town, and the Ground itself.

Follow Me to Ground is fascinating and frightening, urgent and propulsive. In Ada, award-winning author Sue Rainsford has created an utterly bewitching heroine, one who challenges conventional ideas of womanhood and the secrets of the body. Slim but authoritative, Follow Me to Ground lingers long after its final page, pulling the reader into a dream between fairy tale and nightmare, desire and delusion, folktale and warning.

Sue Rainsford: Sue Rainsford is a fiction and arts writer based in Dublin. A graduate of Trinity College, she completed her MFA in writing and literature at Bennington College, Vermont. She is a recipient of the VAI/DCC Critical Writing Award, the Arts Council Literature Bursary Award, and a MacDowell Colony Fellowship. When it was first published, Follow Me to Ground won the Kate O’Brien Award and was longlisted for the Desmond Elliott Award and the Republic of Consciousness Award.