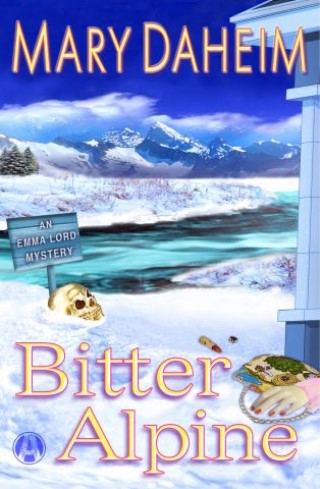 New year, new murder . . . Emma Lord is on the case when death finds its way back to the wintry mountain town of Alpine.

After a relatively calm and cozy holiday season, neither Emma Lord, editor and publisher of The Alpine Advocate, nor her husband, Sheriff Milo Dodge, are surprised when their new year gets off to a rocky start. A woman’s body has been found in a squalid motel. Her driver’s license shows that Rachel Jane Douglas was in her late thirties and lived in Oakland, California—and the only connection between that town and Alpine is their gold-mining and logging origins. When they discover that Rachel’s room reservation was open-ended, Emma, Milo, and the ever-inquisitive Advocate receptionist, Alison Lindahl, are more than mildly curious. And never mind that the youthful Alison is a bit distracted by the new county extension agent’s virile good looks. She can still sleuth while she stalks her newest crush.

But that’s not all the news that’s unfit to print. There’s something strange about the older couple who have moved into the cabin down the road that was once owned by a murder victim. The elderly wife seems anti-social. There’s got to be a reason, which Emma, Milo, and Alison intend to find out—even if it puts them in deadly danger.

Mary Daheim: Mary Richardson Daheim started spinning stories before she could spell. Daheim has been a journalist, an editor, a public relations consultant, and a freelance writer, but fiction was always her medium of choice. In 1982, she launched a career that is now distinguished by more than sixty novels. In 2000, she won the Literary Achievement Award from the Pacific Northwest Writers Association. In October 2008, she was inducted into the University of Washington’s Communication Alumni Hall of Fame. Daheim lives in her hometown of Seattle and is a direct descendant of former residents of the real Alpine, which existed as a logging town from 1910 to 1929, when it was abandoned after the mill was closed. The Alpine/Emma Lord series has created interest in the site, which was named a Washington State ghost town in July 2011. An organization called the Alpine Advocates has been formed to preserve what remains of the town as a historic site.