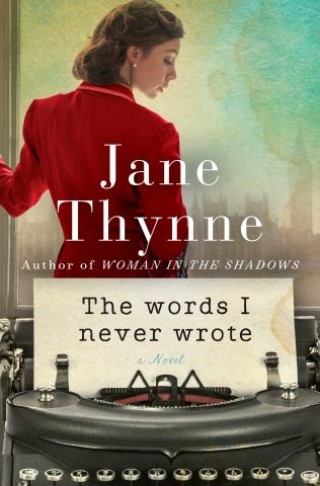 The Words I Never Wrote

A chance discovery inside a vintage typewriter case reveals the gripping story of two sisters on opposite sides of World War II in this captivating novel for readers of Lilac Girls and The Women in the Castle.

New York, present day: On a whim, Juno Lambert buys a 1931 Underwood typewriter that once belonged to celebrated journalist Cordelia Capel. Within its case she discovers an unfinished novel, igniting a transatlantic journey to fill the gaps in the story of Cordelia and her sister and the secret that lies between them.

Europe, 1936: Cordelia’s socialite sister Irene marries a German industrialist who whisks her away to Berlin. Cordelia, feistier and more intellectual than Irene, gets a job at a newspaper in Paris, pursuing the journalism career she cherishes. As politics begin to boil in Europe, the sisters exchange letters and Cordelia discovers that Irene’s husband is a Nazi sympathizer. With increasing desperation, Cordelia writes to her beloved sister, but as life in Nazi Germany darkens, Irene no longer dares admit what her existence is truly like. Knowing that their letters cannot tell the whole story, Cordelia decides to fill in the blanks by sitting down with her Underwood and writing the truth.

When Juno reads the unfinished novel, she resolves to uncover the secret that continued to divide the sisters amid the turmoil of love, espionage, and war. In this vivid portrait of Nazi Berlin, from its high society to its devastating fall, Jane Thynne examines the truths we sometimes dare not tell ourselves.

Advance praise for The Words I Never Wrote

“In sumptuous prose, Jane Thynne limns the lives of two sisters ripped apart by the moral choices they made in a time of war. Dramatic, fast-paced, and emotional, The Words I Never Wrote puts the interior details of women’s lives in stark relief against the dramatic backdrop of Europe in World War II, helping readers understand the difficult choices that women made.”—Elizabeth Letts, author of The Perfect Horse: The Daring U.S. Mission to Rescue the Priceless Stallions Kidnapped by the Nazis

“Haunting, taut, and compelling, this portrait of two upper-class British sisters divided by World War II is a kaleidoscopic story of love and betrayal whose characters are never quite what they seem. It will capture your attention immediately and keep you thinking for a long time to come.”—Lynne Olson, author of Madame Fourcade’s Secret War

Jane Thynne: Jane Thynne was born in Venezuela and educated in London. After graduating from Oxford, she worked for the BBC, The Sunday Times, and The Daily Telegraph. She continues to freelance as a journalist while writing her historical fiction. Her novels, including the Clara Vine series, have been published in French, German, Greek, Turkish, Italian, and Romanian. The widow of Philip Kerr, she has three children and lives in London, where she is working on her next novel.