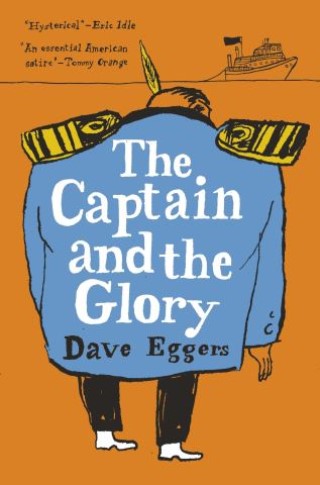 The Captain and the Glory

A savage satire of the United States in the throes of insanity, this blisteringly funny novel tells the story of a noble ship, the Glory, and the loud, clownish, and foul Captain who steers it to the brink of disaster.

When the decorated Captain of a great ship descends the gangplank for the final time, a new leader, a man with a yellow feather in his hair, vows to step forward. Though he has no experience, no knowledge of nautical navigation or maritime law, and though he has often remarked he doesn't much like boats, he solemnly swears to shake things up. Together with his band of petty thieves and confidence men known as the Upskirt Boys, the Captain thrills his passengers, writing his dreams and notions on the cafeteria wipe-away board, boasting of his exemplary anatomy, devouring cheeseburgers, and tossing overboard anyone who displeases him. Until one day a famous pirate, long feared by passengers of the Glory but revered by the Captain for how phenomenally masculine he looked without a shirt while riding a horse, appears on the horizon . . . Absurd, hilarious, and all too recognizable, The Captain and the Glory is a wicked farce of contemporary America only Dave Eggers could dream up.

Dave Eggers: DAVE EGGERS is the author of twelve books, including The Parade; The Monk of Mokha; The Circle; Heroes of the Frontier; A Hologram for the King, a finalist for the National Book Award; and What Is the What, a finalist for the National Book Critics Circle Award and winner of France's Prix Médicis Étranger and the Dayton Literary Peace Prize. His nonfiction and journalism have appeared in The Guardian, the New Yorker, The Best American Travel Writing, and the Best American Essays. He is the founder of McSweeney's, an independent publishing company, and cofounder of Voice of Witness, a book series that uses oral history to illuminate human rights crises around the world. He is the cofounder of 826 National, a network of youth writing and tutoring centers with locations around the country, and of ScholarMarch, which connects donors with students to make college accessible. He is a member of the American Academy of Arts and Letters. His work has been translated into forty-two languages. He lives in Northern California with his family.