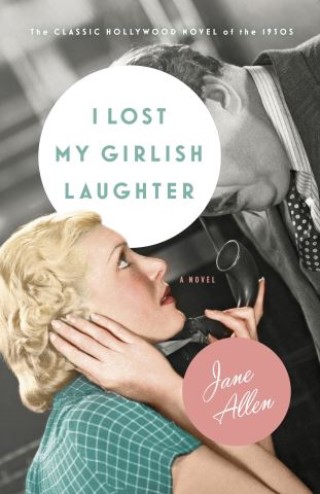 I Lost My Girlish Laughter

A lost literary gem of Hollywood in the 1930s, I Lost My Girlish Laughter is a thinly veiled send-up of the actors, producers, writers, and directors of the Golden Age of the studio system.

Madge Lawrence, fresh from New York City, lands a job as the personal secretary to the powerful Hollywood producer Sidney Brand (based on the legendary David O. Selznick). In a series of letters home, Western Union telegrams, office memos, Hollywood gossip newspaper items, and personal journal entries, we get served up the inside scoop on all the shenanigans, romances, backroom deals, and betrayals that go into making a movie.
The action revolves around the production of Brand's latest blockbuster, meant to be a star vehicle to introduce his new European bombshell (the real-life Marlene Dietrich). Nevermind that the actress can't act, Brands' negotiations with MGM to get Clark Gable to play the male lead are getting nowhere, and the Broadway play he's bought for the screenplay is reworked so that it is unrecognizable to its author. In this delicious satire of the film business, one is never very far from the truth of what makes Hollywood tick and why we all love it.

Jane Allen: SILVIA SCHULMAN LARDNER was born in New York City in 1913, the child of Russian Jewish immigrants. She attended Hunter College in Manhattan before leaving to work for RKO as a secretary. She later worked for MGM and Selznick International, as producer David O. Selznick's personal secretary. She cowrote a play with fellow Selznick staffer Barbara Keon in 1935 and worked on A Star Is Born (1937) and preproduction for Gone with the Wind (1939). She left Hollywood in 1937 and published her novel I Lost My Girlish Laughter, in collaboration with Jane Shore, in 1938. She raised two children and worked for many years as an interior designer and building contractor in California. She died of cancer in 1993.

J. E. SMYTH is professor of history at the University of Warwick (UK) and the author of several books about Hollywood, including Nobody's Girl Friday: The Women Who Ran Hollywood (2018).