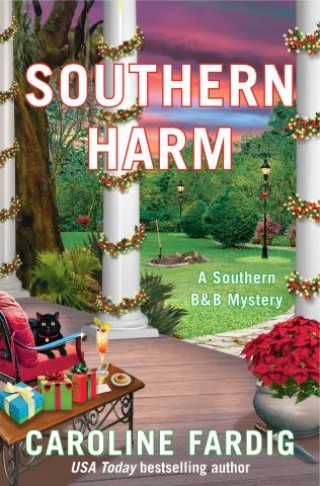 After solving a murder at a local restaurant, Quinn Bellandini just wants to get back to her comfortable life running her grandfather’s B&B in Savannah, Georgia, with her sister, Delilah. But those plans get buried when Quinn and her new boyfriend, Tucker Heyward, dig up an old skeleton while doing some landscaping in his aunt Lela’s backyard. Before long, Lela becomes the prime suspect in the thirty-three-year-old unsolved murder of a high school homecoming queen.

Tucker is devastated. But Quinn’s conscience won’t let her risk an elderly woman spending her twilight years in jail for a crime she didn’t commit. And Delilah, bored by the quiet B&B biz, has been itching to do some more investigating of her own.

Soon they’re questioning a growing list of suspects, from nosy neighbors and snooty Savannah socialites to mild-mannered teachers and old high-school friends of the victim—including Quinn and Delilah’s own parents. But no one is safe from a killer who’s totally old school.

Caroline Fardig: Caroline Fardig is the USA Today bestselling author of more than a dozen mysteries. Fardig’s Bad Medicine was named one of the best books of the year by Suspense Magazine. She worked as a schoolteacher, church organist, insurance agent, funeral parlor associate, and stay-at-home mom before she realized that she wanted to be a writer when she grew up. Born and raised in a small town in Indiana, Fardig still lives in that same town with an understanding husband, two sweet kids, two energetic dogs, and one malevolent cat.