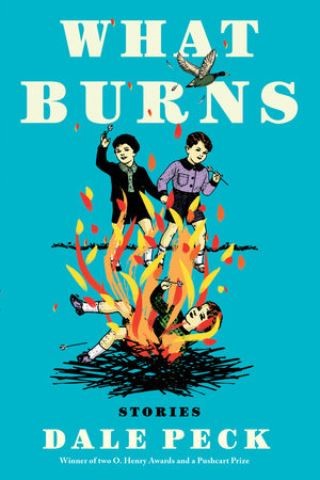 The first collection of short fiction from Lambda Award–winning novelist Dale Peck spans twenty-five years of writing, including two O. Henry award-winners and the recipient of a Pushcart Prize.

The stories in What Burns examine the extremes of desire against a backdrop of family, class, and mortality.

In “Bliss,” a young man befriends the convicted felon who murdered his mother when he was only a child. In “Not Even Camping Is Like Camping Anymore,” a teenage boy fends off the advances of a five-year-old his mother babysits. And in “Dues,” a man discovers that everything he owns is borrowed from someone else—including his time on earth.

Walking the tightrope between tenderness and violence that has defined Peck’s work since the publication of his first novel, Martin and John, through his most recent, Night Soil, What Burns reveals Peck’s mastery of the short form.

Dale Peck: Dale Peck is the author of fourteen books in a variety of genres, including Visions and Revisions, Martin and John, Hatchet Jobs, and Sprout. His fiction and criticism have appeared in dozens of publications, and have earned him two O. Henry Awards, a Pushcart Prize, a Lambda Literary Award, and a John Simon Guggenheim Memorial Fellowship. He lives in New York City, where he has taught in the New School’s Graduate Writing Program since 1999.