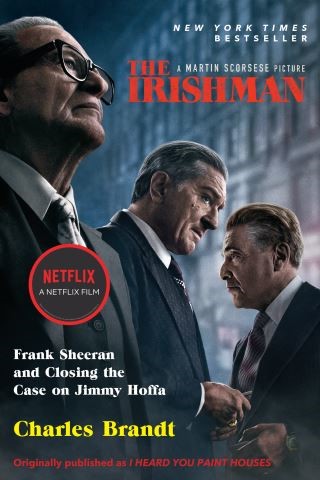 Frank Sheeran and Closing the Case on Jimmy Hoffa

ORIGINALLY PUBLISHED AS I HEARD YOU PAINT HOUSES

“Told with such economy and chilling force as to make The Sopranos suddenly seem overwrought and theatrical.” —New York Daily News

Includes an Epilogue and a Conclusion that detail substantial post-publication corroboration of Frank Sheeran's revelations about the killings of Jimmy Hoffa, Joey Gallo and JFK.

The Irishman is an epic saga of organized crime in post-war America told through the eyes of World War II veteran Frank Sheeran, a hustler and hitman who worked for legendary crime boss Russell Bufalino alongside some of the most notorious figures of the 20th Century. Spanning decades, Sheeran’s story chronicles one of the greatest unsolved mysteries in American history, the disappearance of legendary union boss Jimmy Hoffa, and it offers a monumental journey through the hidden corridors of organized crime: its inner workings, rivalries and connections to mainstream politics. Sheeran would rise to a position of such prominence that in a RICO suit against The Commission of La Cosa Nostra, the US Government would name him as one of only two non-Italians in conspiracy with the Commission. Sheeran is listed alongside the likes of Anthony “Tony Pro” Provenzano and Anthony “Fat Tony” Salerno.

In the course of nearly five years of recorded interviews, Sheeran confessed to Charles Brandt that he handled more than twenty-five hits for the mob, and Brandt turned Sheeran’s story into a page-turning true crime classic.

Charles Brandt: Born and raised in New York City, Charles Brandt is a former junior high school English teacher, welfare investigator in East Harlem, homicide prosecutor, and Chief Deputy Attorney General of the State of Delaware. In private practice since 1976, Brandt has been president of the Delaware Trial Lawyers Association and the Delaware Chapter of the American Board of Trial Advocates. He has been named by his peers to both Best Lawyers in America and Best Lawyers in Delaware. He is a frequent speaker on cross-examination and interrogation techniques for reluctant witnesses. Brandt is the author of a novel based on major cases he solved through interrogation, The Right to Remain Silent. He is also the co-author of Joe Pistone's Donnie Brasco: Unfinished Business and of Lin DeVecchio's We're Going to Win This Thing: The Shocking Frame-Up of a Mafia Crime Buster.