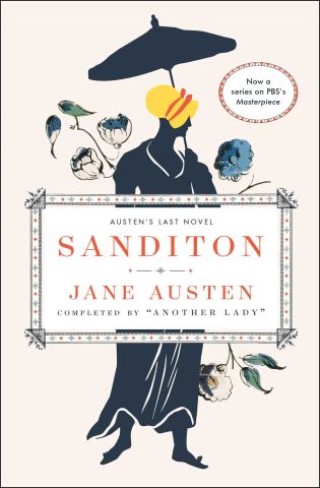 Sanditon—an eleven-chapter fragment left at Jane Austen’s death completed by an Austen devotee and novelist— is a charming addition to Austen’s novels on England’s privileged classes and the deception, snobbery, and unexpected romances that occur in their world. When Charlotte Heywood accepts an invitation to visit the newly fashionable seaside resort of Sanditon, she is introduced to a full range of polite society, from reigning local dowager Lady Denham to her impoverished ward Clara, and from the handsome, feckless Sidney Parker to his amusing, if hypochondriac, sisters. A heroine whose clear-sighted commens sense is often at war with romance, Charlotte cannot help observing around her both folly and passion in many guises. But can the levelheaded Charlotte herself resist the desires of the heart?

Jane Austen: Jane Austen (1775-1817) was an English novelist known primarily for her six major novels—Sense and Sensibility, Pride and Prejudice, Mansfield Park, Emma, Northanger Abbey, and Persuasion—which observe and critique the British gentry of the late eighteenth century. Her mastery of wit, irony, and social commentary made her a beloved and acclaimed author in her lifetime, a distinction she still enjoys today around the world.“Another Lady” completed Sanditon for this edition and is the pseudonym for a novelist who lives in England.