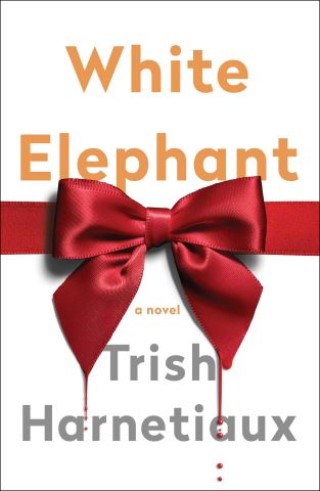 A crackling Christmas mystery that combines murder and blackmail at a holiday office party, in a mashup reminiscent of Big Little Lies and Clue.

There are only a few rules in a White Elephant gift exchange: 1) Everyone brings a wrapped, unmarked gift. 2) Numbers are drawn to decide who picks first. 3) Gifts don’t need to be pricey—and often they’re downright tacky.

But things are a little different in Aspen, Colorado, at the office holiday party for the real estate firm owned by Henry Calhoun and his wife Claudine. Each Christmas sparks a contest among the already competitive staff to see who can buy the most coveted gift: the one that will get stolen the most times, the one that will prove just how many more commissions they earned that year than their colleagues. Designer sunglasses, deluxe spa treatments, front row concert tickets—nothing is off the table. And the staff is even more competitive this year as Zara, the hottest young pop star out of Hollywood, is in town and Claudine is determined to sell her the getaway home of her dreams.

Everyone is puzzled when a strange gift shows up in the mix: an antique cowboy statue. At least the sales agents are guessing it’s an antique—otherwise it’d be a terrible present. It’s certainly not very pretty or expensive-looking. In fact, the gift makes sense only to Henry and Claudine. The statue is the weapon Henry used to commit a murder years ago, a murder that helped start his company and a murder that Claudine helped cover up. She swore that no one would ever be able to find the statue or trace it to their crime. So which of their employees did? And why did they place it in the White Elephant? What could possibly be their endgame?

Over the course of the evening, Henry and Claudine race to figure out who could have planted the weapon, and just what the night means for the secrets they’ve been harboring. Further adding to the drama is a snowstorm that closes nearby roads—preventing anyone from leaving, as well as keeping law enforcement from the scene. And by the end of this crazy night, the police will most definitely be required…

Trish Harnetiaux: Trish Harnetiaux is a Brooklyn-based writer. Her plays How to Get into Buildings, Welcome to the White Room, and If You Can Get to Buffalo have been published by Samuel French. Her latest play Tin Cat Shoes premiered at Clubbed Thumb's Summerworks and she is currently developing Bender and Brian, an epic tale of subversive Breakfast Club FanFiction. Harnetiaux has been a resident at MacDowell, The Millay Colony and Yaddo. She holds an MFA from Brooklyn College, and her work can be found at TrishHarnetiaux.com.