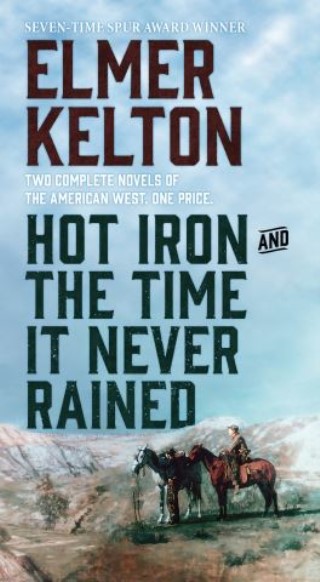 Hot Iron and The Time It Never Rained

With Hot Iron and The Time It Never Rained, this omnibus by legendary Western writer Elmer Kelton offers two complete novels of the American West at one low price

In the early days of the Texas panhandle, starting a new life is hard, but keeping it is even harder. Espy Norwood is a troubleshooter already wrestling with a slew of problems when he lands a job on a ranch on the Texas plains—and more trouble finds him. Bitter landowners plot against him, determined cattle thieves sneak right under his nose, and his own son refuses to trust or even know him. Can he catch the thieves, save the ranch, and win his son’s love?

The Time It Never Rained

To the ranchers and farmers of 1950s Texas, man’s greatest enemy is one he can’t control. With entire livelihoods pegged on the chance of a wet year or a dry year, drought has the ability to crush whole enterprises, to determine who stands and falls, and to rob workers and their families of food. To Charlie Flagg, an honest, decent, and cantankerous rancher, the drought of the early 1950s is a foe he must fight on his own grounds. Refusing the questionable “help” of federal aid programs, Charlie and his family struggle to make the ranch survive until the time it rains again—if it ever will.

Elmer Kelton: ELMER KELTON (1926-2009) was the seven-time Spur Award-winning author of more than forty novels and the recipient of the Owen Wister Lifetime Achievement award. His books included the Texas Rangers and Sons of Texas series, The Time It Never Rained, Other Men’s Horses, Texas Standoff, and Hard Trail to Follow. In addition to his novels, Kelton worked as an agricultural journalist for forty-two years, and served in the infantry in World War II.