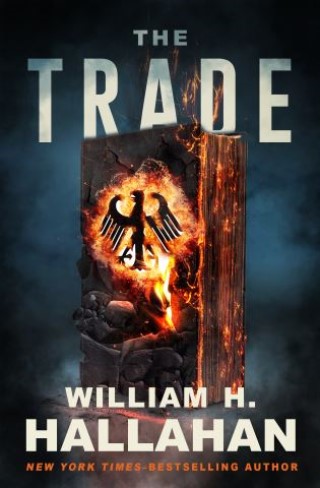 “Hallahan graduates to the Ludlum-Follett class of writers with this crackling good thriller” (Publishers Weekly).

In this brilliant thriller set against the chilling background of the international arms trade, a former American intelligence agent is killed in the Paris Metro. He dies talking of the Doomsday Book. This deadly document is the inspiration for twenty years of plotting by some of the most influential elements of Germany’s arms business. It contains a sinister plan that, if unleashed, could plunge the United States, Russia, and China into a World War III.

US agent Charlie Brewer and Colin Thomas, a shrewd, gritty international trader in everything from hand grenades to jet fighters, find themselves desperately dueling with the brilliant daughter of Germany’s leading intelligence officer as they slowly penetrate a shocking worldwide conspiracy.

“Puts William Hallahan up above Le Carré, Deighton and Co.” —The Bookseller

William H. Hallahan:
William H. Hallahan (1925–2019) was an Edgar Award–winning American author whose works spanned genres but who was best known for his bestselling mystery and occult novels. His first novel, The Dead of Winter, was nominated for the Edgar Award for Best First Mystery Novel, and his suspense novel, Catch Me: Kill Me, won the Edgar Award for Best Mystery Novel. Hallahan’s occult novel, The Search for Joseph Tully, was a New York Times bestseller and hailed as one of the best books of its genre. For the book opening, mock gravestones that read “Here Lies Joseph Tully” were lined up and down Park Avenue in New York. His other works of fiction include The Ross Forgery, Keeper of the Children, The Trade, The Monk, Foxcatcher, and Tripletrap. His works were translated into many languages and released throughout the world.

Hallahan was born in the shadow of Ebbets Field, Brooklyn; spent three years in the Navy; graduated with honors and a master’s degree from Temple University; and worked variously as a college English professor, a copywriter, and an ad agency proprietor in his own agency, Hallahan Incorporated.