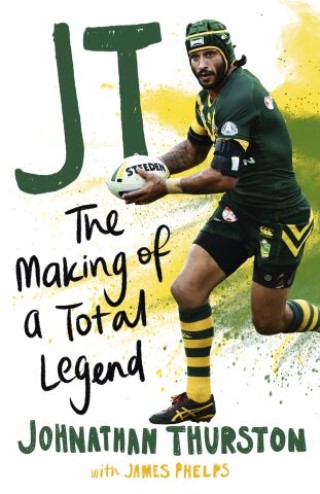 The Making of a Total Legend

JT. One of the greats, simply the best. He is Johnathan Thurston.

As a young Brisbane kid, Johnathan Thurston was written off as too skinny, too slow and too wild to play rugby league professionally. But he defied the odds to become one of the game's greatest players.

In this young readers' edition of his bestselling autobiography, follow his journey from his debut with the Canterbury Bulldogs in 2002, to State of Origin star, and to total legend of the game.

Johnathan Thurston: Johnathan Thurston made his NRL debut back in 2002 with the Bulldogs, picking up a premiership ring in the Clubs 2004 Grand Final victory. He has played in every game in each of Queensland's eight consecutive State of Origin victories, achieved the highest individual honour in Rugby League by being awarded the Golden Boot for World Player of the Year and has the rare distinction of winning three Dally M medals. In 2015 he won a premiership for his beloved North Queensland Cowboys and Townsville.James Phelps is an award-winning senior reporter for Sydney's The Daily Telegraph and The Sunday Telegraph. He began as an overnight police-rounds reporter before moving into sport, where he became one of Australia's best news-breaking rugby league journalists. James was then appointed News Corp Australia's Chief National Motorsports Writer and travelled the world chasing Formula 1 stories, as well as covering Australia's V8 Supercar races. Following the publication of his bestselling autobiography of Dick Johnson, James quickly established himself as Australia's number-one true crime writer with his bestselling prison series, including Australia's Hardest Prison, Australia's Most Murderous Prison, and Australia's Toughest Prisons. His most recent book, Australian Heist, was a dramatic retelling of the true story behind Australia's largest gold robbery.