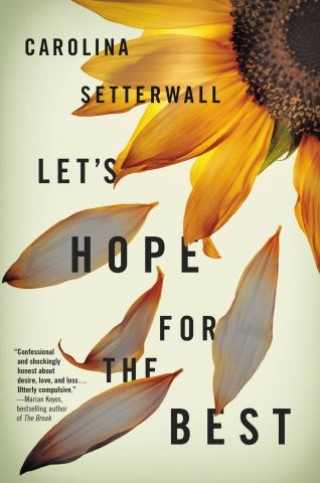 Let's Hope for the Best

"In Let's Hope for the Best, the protagonist becomes a widow in a moment, a moment that I cannot get out of my head. I feel tremulous admiration for how a work of beauty can exist within a well of violent pain. We should read to explore the width of our humanity. And ultimately, how to expand it."--Lisa Taddeo, bestselling author of Three Women
In her debut novel, Let's Hope for the Best, Carolina Setterwall recounts the intensity of falling in love with her partner Aksel, and the shock of finding him dead in bed one morning. Carolina and Aksel meet at a party, and their passionate first encounter leads to months of courtship during which Carolina struggles to find her place. While Aksel prefers to take things slow, Carolina is eager to advance their relationship -moving in together, getting a cat, and finally having a child.

Perhaps to impose some order on the chaos, Carolina devotedly chronicles the months after Aksel's passing like a ship's log. She unpacks with forensic intensity the small details of life before tragedy, eager to find some explanation for the bad hand she's been dealt. When new romance rushes in, Carolina finds herself assuming the reticent role Aksel once played. She's been given the gift of love again. But can she make it work?

A striking feat of auto-fiction, written in direct address to Setterwall's late partner, LET'S HOPE FOR THE BEST is a stylistic tour-de force.
"A moving and tender work of autofiction that depicts the obsessive interiority of grief."--Kirkus