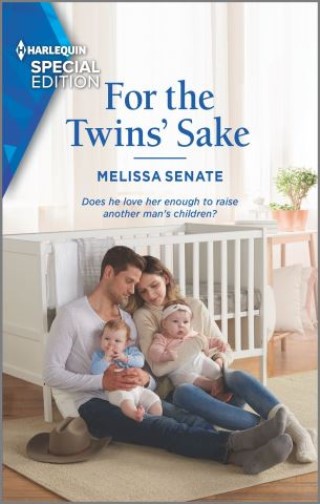 For the Twins' Sake

Read the first book in the Dawson Family Ranch series by Melissa Senate!

Does he love her enough to raise another man’s children?

But is she? Noah is willing enough to believe the adorable newborn left on his doorstep is his child. And then his ex, Sara Mayhew, turns up, claiming the baby is hers--a twin to her infant son--and Noah realizes he’s not the father. Even so, the cowboy has already turned his life around and swapped his spurs for a baby carrier. Despite their still-powerful attraction, Sara isn’t ready to trust the “new” Noah. But he’s already fighting for their future as a family...

Melissa Senate: Melissa Senate has written many novels for Harlequin and other publishers, including her debut, SEE JANE DATE, which was made into a TV movie. She also wrote seven books for Harlequin's Special Edition line under the pen name Meg Maxwell. Melissa's novels have been published in over twenty-five countries. She lives on the coast of Maine with her teenaged son, their sweet shepherd mix, Flash, and a comical lap cat named Cleo. Visit her website MelissaSenate.com.