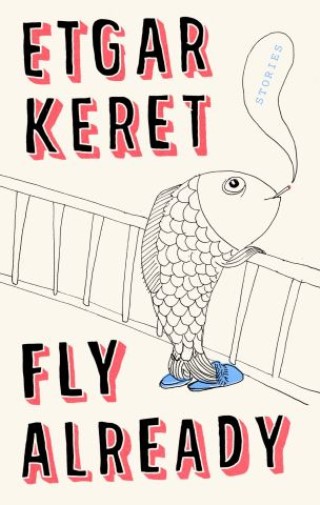 "There is sweetheartedness and wisdom and eloquence and transcendence in his stories because these virtues exist in abundance in Etgar himself... I am very happy that Etgar and his work are in the world, making things better." --George Saunders

There's no one like Etgar Keret. His stories take place at the crossroads of the fantastical, searing, and hilarious. His characters grapple with parenthood and family, war and games, marijuana and cake, memory and love. These stories never go to the expected place, but always surprise, entertain, and move...

In "Arctic Lizard," a young boy narrates a post-apocalyptic version of the world where a youth army wages an unending war, rewarded by collecting prizes. A father tries to shield his son from the inevitable in "Fly Already." In "One Gram Short," a guy just wants to get a joint to impress a girl and ends up down a rabbit hole of chaos and heartache. And in the masterpiece "Pineapple Crush," two unlikely people connect through an evening smoke down by the beach, only to have one of them imagine a much deeper relationship.

The thread that weaves these pieces together is our inability to communicate, to see so little of the world around us and to understand each other even less. Yet somehow, in these pages, through Etgar's deep love for humanity and our hapless existence, a bright light shines through and our universal connection to each other sparks alive.

Etgar Keret: Etgar Keret was born in Ramat Gan and now lives in Tel Aviv. A recipient of the French Chevalier des Arts et des Lettres, the Charles Bronfman Prize, and the Caméra d’Or at the Cannes Film Festival, he is the author of the memoir The Seven Good Years and story collections including The Bus Driver Who Wanted to Be God. His work has been translated into forty-five languages and has appeared in The New Yorker, The Wall Street Journal, Wired, The Paris Review, and The New York Times, among many other publications, and on This American Life, where he is a regular contributor.