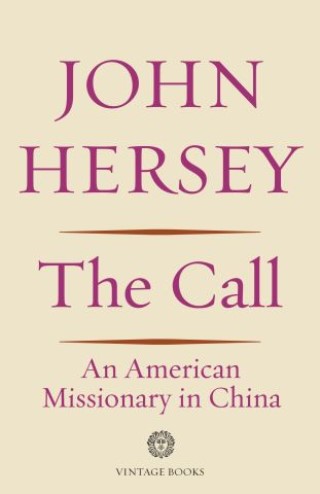 An American Missionary in China

An American missionary in China, David Treadup, is the protagonist of John Hersey’s magnificent novel, a novel whose richness of character, color, and incident both explores the evangelical impulse in this country—the peculiarly American spirit of wanting to help others—and reflects the whole complex history of China from 1900 to the aftermath of World War II.
The Callis the story of one man’s spiritual odyssey as he strives to reconcile his commitment to God with his love of the struggling mass of Chinese humanity, to whom he pledges his life. It is the story of an American family choosing to make a home for themselves in an alien world that is sometimes exhilarating, sometimes overwhelming, always surprising—and periodically inundated by history, famine, war, revolution. It is the story of a marriage of abiding partnership, of a wife at once strong and vulnerable, struggling to be close to a husband whose awesome challenge to somehow make the world a better place for the Chinese people will always claim him.
Treadup’s large adventure opens out from rural upstate New York, where he is raised on a struggling, isolated farm, to the Syracuse campus where, caught up in evangelical fervor, he is struck by a blinding light (through the voice of a Scottish rugby player) and answers the Call, to vast and turbulent China, where he is sent by the Y.M.C.A. to save souls. There, in the face of this three-thousand-year-old civilization, the tall, gregarious, ambitious American becomes quickly aware of his own insufficiency. But Treadup’s astonishing resourcefulness (who would think that a gyroscope could sway multitudes?), and his ever-growing passion to penetrate to the heart of China to bring its yearning people into the twentieth century, fire his energies again and again over the years of triumphs and frustrations, of rekindled vision and lost hopes.
John Hersey, himself the child of a missionary family in China, brings to this deeply human story a profound and intimate knowledge of the life it encompasses, giving us an extraordinary authenticity of place and feeling. It is his crowning achievement.