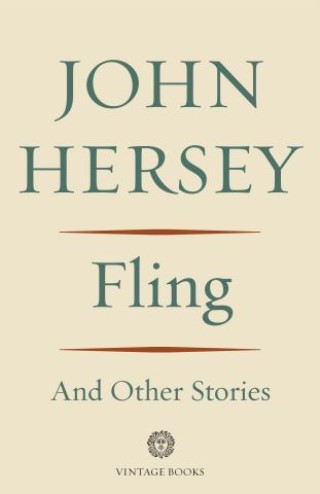 Fling and Other Stories

Writing in a new and different mode, John Hersey, who has enriched us with such memorable novels as A Bell for Adanoand The Wall, now gives us his first collection of short stories. A superb and witty storyteller, he invents a variety of voices…
A boy remembers his childhood summer on the North China sea and the typhoon that punished the fire-and-brimstone preacher for the sin of pride.
A scullery maid tells of the time she took her master’s prize catch with her on a blind date.
An apprentice on a lobster trawler is an uncomfortable witness to the humiliation of his captain—known to be the best lobstering skipper out of either Menemsha or New Bedford…
In the title story, Venus, an insouciant septuagenarian, recaptures in a dazzling tone-perfect recitation the world of the rich and spoiled Lost Generation as she and her “Michelangelic” husband are adventuring in Willa Cather land and indulge in what turns out to be their last fling…
In these beautifully crafted stories Hersey proves himself to be a master of the form, and his eleven tales will delight all who love a good short story.