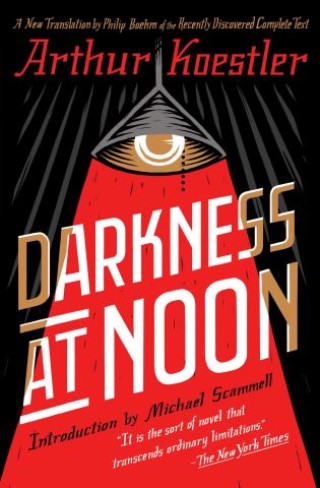 The newly discovered lost text of Arthur Koestler’s modern masterpiece, Darkness at Noon—the haunting portrait of a revolutionary, imprisoned and tortured under totalitarian rule—is now restored and in a completely new translation.

Editor Michael Scammell and translator Philip Boehm bring us a brilliant novel, a remarkable discovery, and a new translation of an international classic.

In print continually since 1940, Darkness at Noon has been translated into over 30 languages and is both a stirring novel and a classic anti-fascist text. What makes its popularity and tenacity even more remarkable is that all existing versions of Darkness at Noon are based on a hastily made English translation of the original German by a novice translator at the outbreak of World War II.

In 2015, Matthias Weßel stumbled across an entry in the archives of the Zurich Central Library that is a scholar's dream: “Koestler, Arthur. Rubaschow: Roman. Typoskript, März 1940, 326 pages.” What he had found was Arthur Koestler’s original, complete German manuscript for what would become Darkness at Noon, thought to have been irrevocably lost in the turmoil of the war. With this stunning literary discovery, and a new English translation direct from the primary German manuscript, we can now for the first time read Darkness at Noon as Koestler wrote it.

Set in the 1930s at the height of the purge and show trials of a Stalinist Moscow, Darkness at Noon is a haunting portrait of an aging revolutionary, Nicholas Rubashov, who is imprisoned, tortured, and forced through a series of hearings by the Party to which he has dedicated his life. As the pressure to confess preposterous crimes increases, he re-lives a career that embodies the terrible ironies and betrayals of a merciless totalitarian movement masking itself as an instrument of deliverance.

Koestler’s portrayal of Stalin-era totalitarianism and fascism is as chilling and resonant today as it was in the 1940s and during the Cold War. Rubashov’s plight explores the meaning and value of moral choices, the attractions and dangers of idealism, and the corrosiveness of political corruption. Like The Trial, 1984, and Animal Farm, this is a book you should read as a citizen of the world, wherever you are and wherever you come from.

Arthur Koestler: Arthur Koestler (1905-1983) was a Hungarian-British author and journalist who immersed himself in the major ideological and social conflicts of his time. In 1931 Koestler joined the Communist Party of Germany until, disillusioned by Stalinism, he resigned in 1938. In 1940 he published his novel Darkness at Noon, an anti-totalitarian work that gained him international fame. Over the course of his life, Koestler espoused many political causes. His novels, reportage, autobiographical works, and political and cultural writings established him as an important commentator on the dilemmas of the twentieth century.