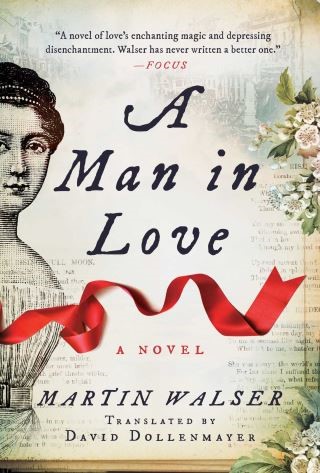 A Man in Love

For readers of Colm Toibin’s The Master and Michael Cunningham’s The Hours, a witty, moving, tender novel of impossible love and the mysterious ways of art.

Johann Wolfgang von Goethe is so famous his servant auctions off snippets of his hair and children and adults recite from his many works by memory. When he was a young poet, his first novel, a story of love and romantic fervor ending in suicide, was an international blockbuster that set off a wave of self-inflicted deaths across Europe. Now seventy-three, sought after and busy with scientific pursuits and responsibilities to the Grand Duke, he has fallen in love with a nineteen-year-old, Ulrike von Levetzov. Infatuated, at the spa in Marienbad, he seeks her out. They exchange glances, witty words. In the social swirl, they find each other. On the promenade, they parade together arm in arm. Time spent away from her is sleepless, and when they kiss, it is in the “Goethian” way, from his books: a matter of souls, not mouths or lips.

And yet, his years fail him. At an afternoon tea party, a younger man tries to seduce her. At a costume ball, he collapses. When he proposes nonetheless, Ulrike and her mother are already preparing to leave. Caught in a storm of emotion and torn between despair and unwillingness to give up hope, he begins an elegy in his coach as he pursues her: “The Marienbad Elegy,” one of his last great works.

Martin Walser: Martin Walser, a contemporary of Heinrich Böll, Günther Grass, and Christa Wolf, remains one of Germany’s most prominent and prolific writers. Born in Wasserburg, on Lake Constance, in 1927, he is the author of numerous novels, stories, and plays, including A Gushing Fountain, published by Arcade. Every one of his novels is a bestseller in Germany, and he has won many awards, including the Georg Büchner Award, the Peace Prize of the German Book Trade, and in 2015 the Nietszche Prize for his life’s work. He lives in Überlingen, near Lake Constanace, Germany.David Dollenmayer is a literary translator and emeritus professor of German at the Worcester Polytechnic Institute in Worcester, Massachusetts. He is the winner of the 2008 Helen and Kurt Wolff Translator’s Prize and the 2010 Translation Prize of the Austrian Cultural Forum in New York, Before undertaking A Man in Love, his most recent translation to be published was the monumental biography Goethe: Life as a Work of Art, by Rüdiger Safranski. David Dollenmayer lives in Hopkinton, Massachusetts.