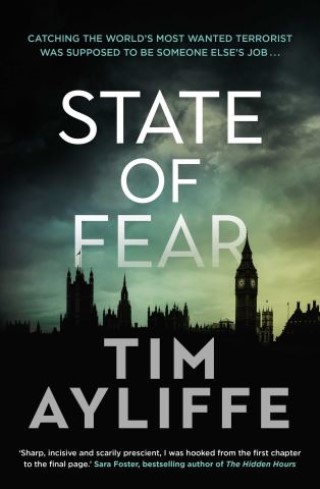 Catching the world's most wanted terrorist was supposed to be someone else's job...

John Bailey has a history of being in the wrong place at the wrong time. The former war correspondent has been kidnapped and tortured – twice. Finally he’s living something that resembles a normal life. But all that changes when a terrorist murders a woman in front of Bailey in London.

The mastermind behind the attack is Mustafa al-Baghdadi – No.1 on the FBI’s most wanted list – and the man who tortured Bailey in Fallujah a decade ago.

Mustafa has a deadly axe to grind with Bailey. He taunts him with threats of more attacks in other cities, closer to home. Back in Sydney, the people who matter most to Bailey have become targets.

Bailey turns to the only man who can help – ruthless CIA veteran Ronnie Johnson – to bring down the world’s most deadly terrorist.

Praise for State of Fear

‘Another brilliantly crafted thriller from Ayliffe that fits perfectly in today’s worrying world … Verdict: Get this guy on TV’ Herald Sun

‘Sharp, incisive and scarily prescient, I was hooked from the first chapter to the final page.’ Sara Foster, bestselling author of The Hidden Hours

‘Utterly compelling and terrifyingly timely. I could not put it down’  Pip Drysdale, bestselling author of The Sunday Girl

‘As a correspondent, I lived this world. Tim Ayliffe has written it’ Stan Grant, writer and broadcaster

Praise for The Greater Good

‘A fun and exhilarating political crime thriller that is guaranteed to electrify and entertain in good measure.’? The Unseen Library

‘Readers will not fail to enjoy the ride from start to finish.’ Good Reading

‘A crime thriller with the lot: murder, deceit, corruption and a hint of romance … Ayliffe takes you deep inside the worlds of politics and the media, with a heavy dose of international intrigue thrown in.’ Michael Rowland

‘If Rake were a journalist, with a talent that equals his capacity to survive being beaten up, Bailey would be him.’ Julia Baird

‘An absolute cracker of a thriller.’ Chris Uhlmann

Tim Ayliffe:
Tim Ayliffe has been a journalist for almost 20 years and is the Managing Editor of Television and Video for ABC News. He has also worked as TV News Editor for ABC News and the Executive Producer of ABC News Breakfast. Before joining the ABC in 2006, Tim worked in London for Sky News as a digital and television journalist. The Greater Good is the first book in a three-book series featuring John Bailey. When he's not writing or chasing news stories Tim rides bikes and surfs. He lives in Sydney with his wife, Justine Dougherty, and their two children, Penelope and Arthur.