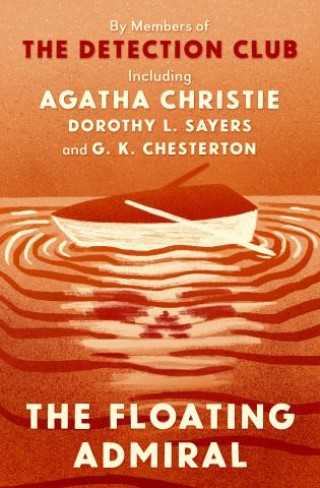 Originally published in 1931, The Floating Admiral is a classic literary collaboration by members of the Detection Club, in which each chapter is written by a different mystery author, with G. K. Chesterton adding a prologue after the novel was completed. Each writer was tasked with building on what the previous writer created, without ignoring or avoiding whatever plot points had come before. Although Anthony Berkeley wrote the definitive conclusion to the mystery in his final chapter, the writers all provided their own individual solutions, each in a sealed envelope, which appear in the appendix. In the words of Dorothy L. Sayers in her introduction, the spirit of the project was that of a “detection game,” for the amusement of the authors—and their readers.

In the sleepy English seaside village of Whynmouth, an old sailor discovers a corpse floating serenely in a rowboat owned by the local vicar. The victim has been stabbed in the chest. It falls to Inspector Rudge to solve this most baffling mystery, in which not only the identity of the killer but the identity of the victim is called into question.

“I was . . . hugely entertained by the virtuoso displays of mental gymnastics, which kept me guessing all the way.” —The Guardian

The Detection Club:
The Detection Club was formed in 1930 by a group of British mystery writers, including Agatha Christie, Dorothy L. Sayers, G. K. Chesterton, Anthony Berkeley, Ronald Knox, Freeman Wills Crofts, Arthur Morrison, Hugh Walpole, John Rhode, Jessie Rickard, Baroness Orczy, R. Austin Freeman, G. D. H. Cole, Margaret Cole, E. C. Bentley, Henry Wade, and H. C. Bailey. John Dickson Carr, elected in 1936, was the first American member. A number of works were published under the club’s sponsorship; most of these were written by multiple members of the club, each contributing one or more chapters in turn.
Dorothy L. Sayers (1893–1957) was a British playwright, scholar, and acclaimed author of mysteries, best known for her books starring the gentleman sleuth Lord Peter Wimsey. While working as an advertising copywriter, Sayers began writing Whose Body? (1923), the first Wimsey mystery, followed by ten sequels and several short stories. Sayers set the Wimsey novels between the two World Wars, giving them a realistic tone by incorporating details from contemporary issues such as advertising, women’s education, and veterans’ health. Sayers also wrote theological essays and criticism during and after World War II, and in 1949 published the first volume of a translation of Dante’s Divine Comedy. Although she considered this translation to be her best work, it is for her elegantly constructed detective fiction that Sayers remains best remembered.
G. K. Chesterton (1874–1936) was a prolific English journalist and author best known for his mystery series featuring the priest-detective Father Brown and for the metaphysical thriller The Man Who Was Thursday. Baptized into the Church of England, Chesterton underwent a crisis of faith as a young man and became fascinated with the occult. He eventually converted to Roman Catholicism and published some of Christianity’s most influential apologetics, including Heretics and Orthodoxy.