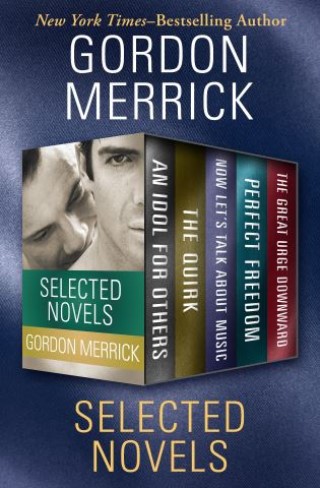 An Idol for Others, The Quirk, Now Let’s Talk About Music, Perfect Freedom, and The Great Urge Downward

Five pulp novels of passionate romance between men from the New York Times–bestselling author of the Peter and Charlie Trilogy.

An Idol For Others: In the 1940s, Walter Makin’s stage career is red-hot—but so is his insatiable hunger for men. He marries an heiress to cover up his secret, but a handsome young writer makes him feel ready to risk the consequences.

The Quirk: A bohemian painter in Paris’s Left Bank, Rod has his youth, his money, and an active sex life. That’s all he thinks he needs, until an attractive male model enters his life.

Now Let’s Talk About Music: After a stream of meaningless flings, Gerry takes time for himself on the sweltering shores of Bangkok. He finally wants a love that’s real. But then Ernst, an international playboy, sends him an invitation.

Perfect Freedom: The son of a wealthy American father and a French mother, Robbie Cosling grew up in Saint-Tropez. But after the handsome young man discovers pleasure in the arms of a man, he ventures off to find the love he deserves . . .

The Great Urge Downward: In this sequel to Perfect Freedom, a dark path led Lance Vanderholden to a small, Central American town where he devotes himself to cheap thrills. Then a young man—also with a storied past—comes along and changes his life.

Gordon Merrick:
Gordon Merrick (1916–1988) was an actor, television writer, and journalist. Merrick was one of the first authors to write about gay themes for a mass audience. He wrote fourteen books, including the beloved Peter & Charlie Trilogy. The Lord Won’t Mind spent four months on the New York Times bestseller list in 1970. Merrick’s posthumously published novel The Good Life, coauthored with his partner, Charles G. Hulse, was a bestseller as well. Merrick died in Sri Lanka.