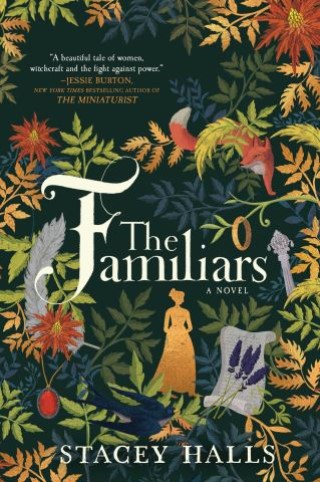 THE FAMILIARS A NOVEL

“A beautiful tale of women, witchcraft and the fight against power.”

“The Familiars is a must-read novel.”

--Heather Morris, bestselling author of The Tattooist of Auschwitz

IN 1612 IN LANCASTER, ENGLAND, THE HUNT FOR WITCHES IS RAMPANT…

BUT IN A TIME OF SUSPICION AND ACCUSATION, TO BE A WOMAN IS THE GREATEST RISK OF ALL

Young Fleetwood Shuttleworth is with child again. As the mistress of Gawthorpe Hall, she is anxious to provide her husband with an heir. But none of her previous pregnancies have come to term. Then she discovers a hidden letter from her physician that warns her husband that she will not survive another pregnancy.

Distraught over the frightening revelation, Fleetwood wanders the woods of Pendle Hill, where she meets a young local woman named Alice Gray. A midwife, Alice promises Fleetwood she can help her deliver a healthy baby. But soon Alice is drawn into the frenzied accusations of witchcraft sweeping the countryside. Even the woodland creatures, the “familiars,” are suspected of practicing the dark arts. Can Fleetwood trust that Alice is really who she says she is?

As the two women’s lives become intertwined, Fleetwood must risk everything to prove Alice’s innocence in order to save her own unborn child. The hunt for witches reaches fever pitch. Time is running out. The trials are about to begin. Both their lives are at stake. Only they know the truth. Only they can save each other.

Set against the Pendle Witch Trials of 1612, this rich and compelling novel draws its characters from historical figures as it explores the lives and rights of seventeenth-century women, ultimately raising the question: Is witch-hunting really just women-hunting?

Stacey Halls: Stacey Halls was born in 1989 and grew up in Lancashire, England. She studied journalism at the University of Central Lancashire and has worked as a journalist since the age of 21, writing for publications including The Independent, Fabulous magazine, Stylist and Psychologies. She lives in London with her husband. The Familiars is her first novel.