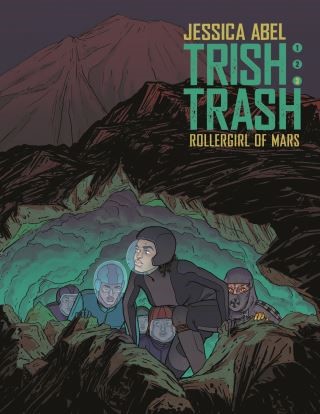 After meeting the indigenous Martian, Qiqi, Trish Nupindju’s life changes forever. Qiqi has taught her to skate on terrain, helping her immensely on her hoverderby (a futuristic roller derby) team. She has also introduced a new way to harvest the moisture essential for life on Mars. But the suits at AREX are watching and they are not pleased. Trish’s innovations could cause irreparable damage for everyone in her life-including her team and family!

Jessica Abel: Cartoonist and writer JESSICA ABEL, from Chicago, IL, is the author of the graphic novel La Perdida (winner of the 2002 "Best New Series" Harvey Award) as well as two collections of stories from her omnibus comic book Artbabe. She and her husband, cartoonist Matt Madden, were series editors for The Best American Comics from 2007 to 2013 and teach at various institutions. Together they've authored two textbooks about making comics, Drawing Words & Writing Pictures and Mastering Comics.