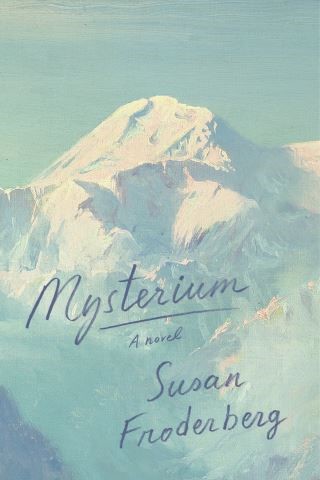 Inspired by the true story of Nanda Devi Unsoeld’s tragic 1976 death while climbing her namesake mountain, Susan Froderberg’s novel Mysterium tells the tale of a courageous woman’s ascent to the summit of India’s highest peak to honor her fallen mother.

Mysterium, known as Mount Sarasvati, looms over the Indian Himalayas as the range’s tallest peak in the dazzling fictional world Susan Froderberg has created.

Sarasvati “Sara” Troy is determined to reach the peak for which she was christened, and to climb it in honor of her mother, who perished in a mountaineering accident when Sara was just a child. She asks her father, a celebrated mountaineer and philosophy professor, to organize and lead the expedition.The six climbers he recruits are an uneasy mix. They include his longtime friend Dr. Arun Reddy, a recent widower, and Reddy’s son, who often challenges his father; Wilder Carson, the acclaimed climber who is tormented by the death of his brother; Wilder’s wife, Vida, a former lover of Dr. Reddy; and the distinguished scholar of climbing Virgil Adams and his wife, Hillary. Porters and Sherpas are recruited in India to assist and be part of the team.

The party’s journey is harrowing, taking them from the mountain’s gorge, into its sanctuary, and finally onto the summit, a path that evokes the hell, purgatory, and heaven of Dante’s Inferno. As the air thins and this unforgettable journey unfolds, Sara emerges as a Beatrice-like figure, buoying her companions up the mountain through the sheer strength and beauty of her being. Both monumental quest and dreamlike odyssey, Mysterium is infused with the language of climbing and profound existential insight.

Susan Froderberg: Susan Froderberg is the author of Old Border Road (2010), which the Los Angeles Times hailed as a “remarkable debut novel.” Her fiction has appeared in Alaska Quarterly Review, Antioch Review, Conjunctions and others. She worked for several years as a critical care nurse in Seattle before moving East to study medical ethics and philosophy at Columbia University, where she received her PhD. She and her husband split their time between Seattle and New York City.