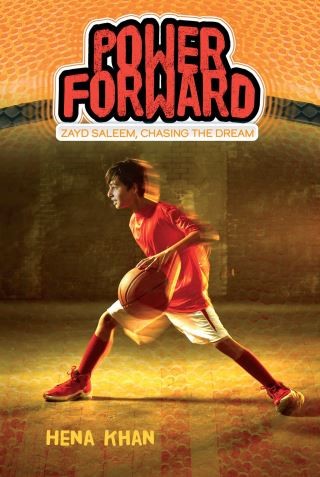 From the critically acclaimed author of Amina’s Voice comes the first book in an exciting new middle grade series about a fourth-grader with big dreams of basketball stardom.

Fourth grader Zayd Saleem has some serious hoop dreams. He’s not just going to be a professional basketball player. He’s going to be a star. A legend. The first Pakistani-American kid to make it to the NBA. He knows this deep in his soul. It’s his destiny. There are only a few small things in his way.

For starters, Zayd’s only on the D-team. (D stands for developmental, but to Zayd it’s always felt like a bad grade or something.) Not to mention, he’s a bit on the scrawny side, even for the fourth grade team. But his best friend Adam is on the Gold Team, and it’s Zayd’s dream for the two of them to play together.

His mom and dad don’t get it. They want him to practice his violin way more than his jump shot. When he gets caught blowing off his violin lessons to practice, Zayd’s parents lay down the ultimate punishment: he has to hang up his high tops and isn’t allowed to play basketball anymore.

As tryouts for the Gold Team approach, Zayd has to find the courage to stand up for himself and chase his dream.

Hena Khan: Hena Khan is a Pakistani American writer. She is the author of the middle grade novels Amina’s Voice and More to the Story and picture books Golden Domes and Silver Lanterns, Under My Hijab, and It’s Ramadan, Curious George, among others. Hena lives in her hometown of Rockville, Maryland, with her basketball-loving family. You can learn more about Hena and her books by visiting her website at HenaKhan.com or connecting with her @HenaKhanBooks.Sally Wern Comport has illustrated numerous picture books and novels, including Love Will See You Through: Martin Luther King Jr.’s Six Guiding Beliefs (as told by his niece); Brave Margaret: An Irish Adventure; Hanging Off Jefferson’s Nose: Growing Up on Mt. Rushmore; and the Spy Mice series. She has also translated her picture making skills to various large-scale public, private, and institutional artworks. Sally lives with her husband and two daughters in Annapolis, Maryland, where she operates Art at Large Inc. Learn more at ArtAtLargeInc.com.