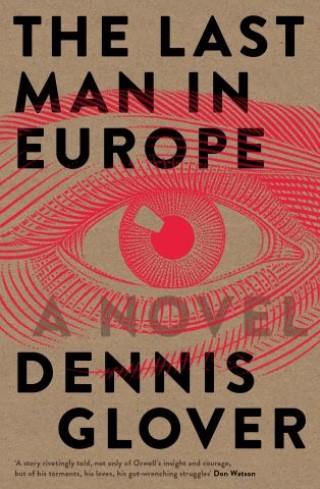 The Last Man in Europe

April 1947. In a run-down farmhouse on a remote Scottish island, George Orwell begins his last and greatest work- Nineteen Eighty-Four

Forty-four years old and suffering from the tuberculosis that within three winters will take his life, Orwell comes to see the book as his legacy - the culmination of a career spent fighting to preserve the freedoms which the wars and upheavals of the twentieth century have threatened. Completing the book is an urgent task, a race against death. In this illuminating novel, Dennis Glover masterfully explores the creation of Orwell’s classic work, which for millions of readers worldwide defined the twentieth century. Simultaneously a captivating drama, a unique literary excavation and an unflinching portrait of a beloved British writer, The Last Man in Europe will change the way you understand Nineteen Eighty-Four.

‘Dennis Glover has dared to burrow into the moral universe of George Orwell, there to look through his unblinking eyes upon the malevolence, vanity, cowardice and deceit that menace the potential for a decent society. The result is a story rivetingly told, not only of Orwell's insight and courage, but of his torments, his loves, his gut-wrenching struggles. Read this book to better know and understand an essential figure of the 20th century whose writing and example still speak to us with urgency.’ – Don Watson, author of Enemy Within: American Politics in the Time of Trump

‘This is a novel about George Orwell and 1984, written uncannily in the style Orwell would have used if he had decided to write a novel about his own life. The result is a fascinating, compelling and, in the end, a deeply moving work, a wonderfully accurate and entirely unsentimental tribute to the political writer who grasped with greatest penetration the meaning of the European catastrophes of the first half of the twentieth century. Glover’s Orwell is fully imagined and precisely understood. With The Last Man in Europe, a major new literary talent has been revealed.’ – Robert Manne, author of The Mind of the Islamic State

‘This is a richly imagined piece of writing, which provides a fascinating insight into the mind of one of the great thinkers of the last century.’ —Nicole Abadee, Australian Financial Review Magazine

‘The Last Man in Europe provides excellent new insight into the works, the man, and what it means to both fear and stare down popularism and the totalitarian impulse.’ —Oliver Driscoll, Readings

‘Dennis Glover's account of Orwell is so compelling and so wonderfully written that I read it all in one go. It's a ludicrously ambitious premise for a novel, but somehow – exhilaratingly – Glover pulls it off. Ten out of ten.’ –Annabel Crabb

‘As the ice caps melt and fake news sticks in our throats, The Last Man in Europe makes Nineteen Eighty-Four bite all over again.’ —Barry Hill, The Australian

‘The Last Man in Europe is clearly the product of a love of Orwell's work … It is a remarkable and timely book.’ —Frank Bongiorno, The Monthly

‘I doubt literary biography will ever recover. Glover is so good with character, place and politics. He's so clever telling you all you need to know while pretending you know it already. Great with pain. You never have a sense that Orwell is rattling down a familiar track. Each step is into the unknown. It's thrilling.’ —David Marr