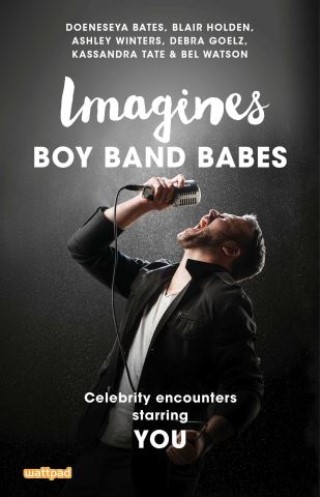 Fanfiction at its best, from your favorite Wattpad authors! In this collection drawn from the Imagines anthology headlined by Anna Todd (After, Nothing More) comes six stories putting “YOU” alongside your favorite pop stars, including Justin Bieber, Zayn Malik, Michael Clifford, Niall Horan, Zac Efron, and Shawn Mendes!

A unique and daring series of imagines in which you get to uncover the real boy behind the pop star hottie! Told in the second-person, “you” get to step into these swoonworthy and unpredictable adventures and do things like go on a romantic and exciting scavenger hunt through the city in search of your husband Justin Bieber, attend the prom of your dreams with Michael Clifford, and party with Shawn Mendes. Dive into the fantasy worlds of your favorite pop stars now!

Note: Although this book mentions many real celebrities, they have not participated in, authorized, or endorsed its creation.

Doeneseya Bates: Doeneseya Bates (@doeneseya on Wattpad) joined Wattpad in 2013. Since then, she has shared fourteen stories and has over 11 million reads. Her popular Body Rock series emphasizes strong female characters who face real issues. Fueled by raw emotion, Doeneseya started writing on Wattpad to address her feelings and created the successful series in the process. When not writing, she can be found cheering on the Chicago Bulls or connecting with her fans (her riders) on social media. Look for her on Twitter, Instagram, and YouTube as @Doeneseya.Debra Goelz (@brittaniecharmintine on Wattpad) is a refugee from Hollywood. She served for ten years as a financial executive for such companies as Universal Pictures, Dino de Laurentiis, and Jim Henson Productions. Her performing career began and ended with her puppeteering a chicken during the closing scene in Muppet Treasure Island. Her YA humorous fantasy written under the pseudonym Brittanie Charmintine, Mermaids and the Vampires Who Love Them, won a Watty Award in 2014. She lives in a redwood forest in rural Marin County with her husband and dog. Her two children have abandoned her to seek a college education in New York.Blair Holden (@jessgirl93 on Wattpad) is a twenty-two-year-old college student by day and Wattpad author by night. Her hobbies include obsessively scouring Goodreads and reading romance novels, with a preference for all things new adult. Her own work usually contains lots of romance, humor, angst, and brooding bad-boy heroes. Caffeine and late-night Gilmore Girls marathons help her find a balance between completing her degree and writing. She writes for herself and also to make readers swoon, laugh, and occasionally cry. Her book, The Bad Boy’s Girl, has amassed nearly 150 million reads, which absolutely baffles her. Her dream, like that of any other aspiring author, is to be published—but more than that, she’d be ecstatic to see her readers holding a published copy of her book and remembering how far they’ve come together! Find her on Twitter as @blairholdenx and on Facebook and Instagram as @jessgirl93.Kassandra Tate (@famouxx on Wattpad) is named after the Greek prophetess who predicted the fall of Troy, but due to an unfortunate curse, nobody listened to her prophecy. Kassandra used to think this was a bad omen for her life until she discovered writing and, eventually, Wattpad, where she currently posts chapters of her novel The Famoux to over a million readers. Her favorite writing music comes from her identical twin sister, Kalina. When she isn’t writing, Kassandra posts pictures of her cat Purrsephone, rants about her love for the Beatles, and brags about California weather on Twitter as @Kassandra_Tate, and can be found on Instagram as @Kassandra_Tate as well.Bel Watson (@belwatson on Wattpad), born in Chile and with Spanish as her first language, learned English in her early twenties and diligently pursued her love for fiction. Now at twenty-five, with a major in linguistics and English literature, Bel is always looking for a new story to tell and new characters to bring to life. She’s passionate about languages and is currently learning Korean, thinking already of which one she’ll learn next. You can always find her on Twitter and Tumblr as @BelWatson, on Instagram as @watsonbel, and on Facebook as @belwatsonbooks. When she’s not talking about cats or fangirling about countless fandoms or Korean dramas, she’s answering her readers.