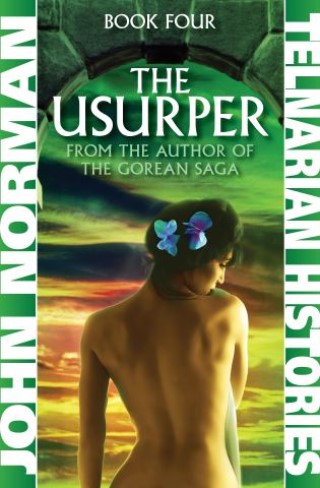 The fourth volume in John Norman’s epic Telnarian Histories describes the continuing rise to power of an unsung warrior thrown into the maelstrom of ambition, treachery, and violence that is the galactic empire

When Filene, a former noblewoman masquerading as a slave, attempts to assassinate the ascendant tribal king, Ottonius, she fails and becomes fully enslaved. The story of her education in proper submission is told in counterpoint to the tale of the powerful but primitive warrior who finds himself drawn into intrigues affecting the destiny of a threatened and crumbling empire.

This ambitious novel, written on an interstellar scale, follows the latest adventures of a man who has fought and killed his way out of obscurity to become a newly crowned king. As events unfold, he finds himself on a bloody and violent path that may lead to the imperial throne itself.

John Norman:
John Norman, born in Chicago, Illinois, in 1931, is the creator of the Gorean Saga, the longest-running series of adventure novels in science fiction history. Starting in December 1966 with Tarnsman of Gor, the series was put on hold after its twenty-fifth installment, Magicians of Gor, in 1988, when DAW refused to publish its successor, Witness of Gor. After several unsuccessful attempts to find a trade publishing outlet, the series was brought back into print in 2001. Norman has also produced a separate, three-installment science fiction series, the Telnarian Histories, plus two other fiction works (Ghost Dance and Time Slave), a nonfiction paperback (Imaginative Sex), and a collection of thirty short stories, entitled Norman Invasions. The Totems of Abydos was published in spring 2012.

All of Norman’s work is available both in print and as ebooks. The Internet has proven to be a fertile ground for the imagination of Norman’s ever-growing fan base, and at Gor Chronicles (www.gorchronicles.com), a website specially created for his tremendous fan following, one may read everything there is to know about this unique fictional culture.

Norman is married and has three children.